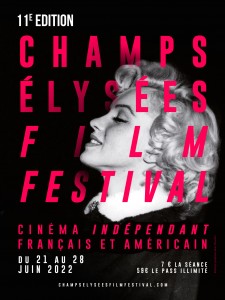 The 11th edition of the Champs-Elysées Film Festival, created by Sophie Dulac, president of Maison Dulac Cinéma, will take place from Tuesday, June 21 to Tuesday, June 28, 2022 in the movie theaters of the most beautiful avenue in the world.

“Because it is more important than ever to meet in cinemas to debate, learn, and enlighten our consciences, I invite you to join me from June 21 to 28, 2022 in the cinemas of the Champs-Elysées. This 11th edition, placed under the sign of renewal and celebration, will mark with panache the launch of a new decade of Champs-Elysées Film Festival.
We strongly hope to be able to offer the most beautiful of shows, that of a free and daring cinema and daring cinema, on the big screen. And I can already tell you that this edition will not lack surprises!”

Sophie Dulac, President of the Champs-Elysées Film Festival
The lineup will be revealed in may !