In 1983, French actress Maria Schneider gives an interview for the TV show Cinéma Cinémas. The conversation takes an unexpected turn when she challenges film industry practices and is asked to talk about the controversial film Last Tango in Paris (1972). 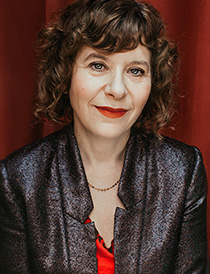 Elisabeth Subrin is a New York based award-winning director and artist. Her critically acclaimed films and video installations have been featured in numerous festivals and exhibitions internationally, including solo shows at The Museum of Modern Art, NY, Film Society of Lincoln Center and the Vienna Viennale. Subrin’s 2016 award-winning feature narrative, A Woman, A Part, had its world premiere in competition at The Rotterdam International Film Festival and traveled to festivals throughout Europe, US and Asia. It was released theatrically in 2017.

Parisian premiere
Year : 2022
Country : France
Runtime : 24 min
Language : French and English
Colour : -
FOR PASS HOLDERS, SCREENINGS CAN BE RESERVED DIRECTLY AT THE CINEMAS CASH BOX AFTER COLLECTING THE PASS AT THE ACCREDITATION OFFICE