"When I rewatched our Super 8 films from between 1972 and 1981, it became clear to me that they were not only a family archive but also a testimony to the tastes, leisure activities, lifestyle and aspirations of a social class in the decade following 1968. I wanted to incorporate this silent footage into a narrative at the crossroads of the historical, social and intimate spheres, using my personal diary from those years.” Annie Ernaux 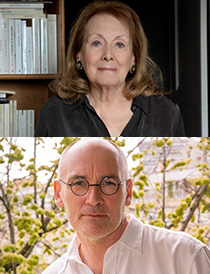 Annie Ernaux was born in 1940. She grew up in the small town of Yvetot, in Normandy, where her parents ran a grocery store. After studying literature in Rouen, she became a professor and a writer. Her first novel, Les armoires vides (1974) portrays a female social class transitioner. Starting with A Man's Place (French: La place; Prix Renaudot 1984), she breaks with fiction and engages in an exploration of her lived experience while seeking new forms of autobiography. To date, she has written about twenty books.

David Ernaux-Briot, son of Annie and Philippe Ernaux, was born in 1968. He grew up in Annecy and Cergy-Pontoise. After studying science, he turned to science journalism and contributed to the programs E=M6 and C'est pas Sorcier. He then wrote and directed the educational mini-series Théâtre des Machines, Corpus, Art et Sport for the Universcience and CANOPE platforms. Les années Super 8 is his first feature-length documentary.