Elina, a 17-year-old aspiring rapper, is forced to leave her native Finland when her mother decides to join her boyfriend on the French Riviera. Elina is immediately fascinated by her new 18-year-old stepsister, Sofia, a charismatic ballerina who is leading a double life full of parties, boys and drugs. But this apparent friendship soon turns into a power play with toxic consequences...

"Elina lives in Finland, in a world full of triumphant urban architecture, and colored neon lights. But her environment is about to change abruptly. Her mother forces her to move into a bucolic and flowery Provence where canopy beds and candy pink flood Elina's fluorescent green punk identity. In this setting, she meets Sofia, her new sister-in-law, a charismatic ballet dancer. Soon, Elina and Sofia's friendship turns into a toxic power play. In Aino Suni's work, romance is all about shifting between worlds and feeling attracted to the other’s scenery. Elina has a claimed identity, a monolith of difference in an unknown universe. These universes, in which Elina and Sofia violently bump into each other, are the musical and artistic worlds that one creates for oneself as a teenager, and that generate reference points and differentiating identities. The purified rigidity and the metallic sound of Elina's raps contrast with the dramatic scope and the purity of Sofia's classical dance. Sofia’s world fascinates Elina. Not for its facetiousness, but for the rigidity and the constraint that the dance exerts on the body in motion. A game of fascination and adolescent domination begins. A phantasmagorical parade of fragility and domination in which Sofia and Elena alternately become the oppressed one and the oppressor, victim, and persecutor, in this period of life where angst and cruelty merge. All these confrontations are agitated in the art spaces in which the other tries to exist, and the interest in the universe of the other only hangs by a thread. The staging of this obsession is exerted above all through Elina's gaze, at first desiring and fascinated, then predatory and carnivorous. Eternal vector of the desire, the glance of Elina seems cursed for daring to desire a being from a world outside of hers. Like Orpheus, she sees herself condemned to be separated from the underworld for daring to contemplate Eurydice so much." 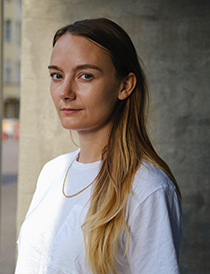 Aino Suni (1985) is a Helsinki-based director and screenwriter who goes both ways - she directs both fiction as well as documentaries. Suni graduated in 2014 with a Master's degree in Film Screenwriting from the University of Salford, UK. Suni's debut fiction feature Heartbeast premieres in 2022. The story of Elina, an aspiring rapper who falls desperately in love with her step-sister, is a unique co-production between France, Finland and Germany.