Royan, 2011. Two young brothers, Tony and Noé, spend the summer playing games of death and chance... Until the accident that will change their lives forever. Ten years later and now young adults, they return to Royan and cross paths with Cassandre, their childhood sweetheart. But the brothers have been hiding a secret all this time...

"A true revelation of the 61st Semaine de la Critique (Cannes 2022), Nos Cérémonies is Simon Rieth’s first feature film. His short film Marave Challenge had already been highly acclaimed in festivals. Halfway between a mythological fable, a fairy tale and a portrait of a youth both lost and in need of love, the film tells us about the strange and disturbing relationship of brothers Tony and Noah - magnificently played by Simon and Raymond Baur. With a sleek and ultra-trendy aesthetic (and the amazing Marine Atlan as director of photography), the film engages in a brilliant reflection on our time between overplayed virilism, toxic masculinity, the fascination of danger, theatricalization of the self and the quest for inconsistent pleasure.

It's all about materials, colors, sensations and light. The carnal, sensual and sexual substance of these bodies that communicate, collide, touch each other, love each other and abuse each other. The very texture of the natural elements that the landscapes of Royan offer us. The blazing sun that bronzes the skin and magnifies these atypical beings of light. These primary colors that inhabit the story, dialogue for the characters and symbolize their emotions. This red, especially. A breath of death, a breath of life, Eros and Thanatos.

Simon Rieth asserts himself as one of the most fascinating and innovative filmmakers of his generation, and manages, through his skillful direction and remarkable casting, to tell us a new story embodied by new bodies, that of a contemporary youth, a myth of modern times." 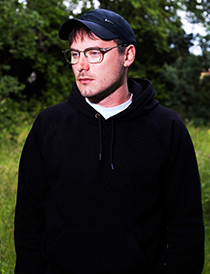 Simon Rieth was born in Paris on September 24, 1995 and grew up in Montpellier. At the age of 26, he has already directed 6 short films, all of which have been selected and awarded in dozens of festivals. His first feature film, Nos Cérémonies (Summer scars), produced by Les Films du Poisson, makes its world premiere as the only French film in competition at the Semaine de la Critique 2022.