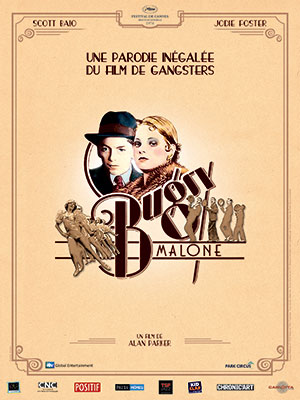 A gangster film where all the gangsters are played by children. Instead of real bullets they use splurge guns” that cover the victim in cream. The story tells of the rise of “Bugsy Malone” and the battle for power between “Fat Sam” and “Dandy Dan”.

Sir Alan Parker is a director, writer and producer. His feature films have won nineteen BAFTA awards, ten Golden Globes and ten Oscars. His films include Bugsy Malone, Midnight Express, Shoot the Moon, Mississippi Burning, The Commitments, Evita, Fame, Birdy, Angel Heart and Angela’s Ashes. He was founding chairman of the UK Film Council, a position he held for five years, and prior to that he was chairman of the British Film Institute.